Google I/O 2017 Application for Android does not use SSL for retrieving some information to populate the app. This would allow an MITM attacker to inject their own content into the application. The vendor (Google) fixed the issue in v5.1.4 of the application.

The Google I/O 2017 application for Android is a companion app produced by Google for their annual I/O conference that takes place in May. This particular version was produced for I/O conference in May of 2017.

While performing network level testing of various Google applications, we discovered that the content for the application did not use SSL. This would allow an MITM attacker to inject their own content into the application using a method like ARP spoofing, DNS takeover, etc.

Screenshots of the feed before and after the data is loaded: 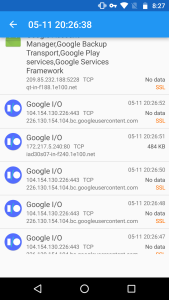 The specific URL was “http://storage.googleapis.com/io2017-festivus/manifest_v1.json” which then causes the device to download additional URLs. The following URLs are downloaded:

This can also be seen in the source code of the I/O 2016 application on Github as follows:

All testing was done on Android 7, Google I/O version 5.0.3. Network captures were performed using an on-device proxy (PacketCapture) without a trusted SSL certificate.

This issue was responsibly reported to the vendor and fixed in version 5.1.4.