Apache Tomcat has a vulnerability in the CGI Servlet which can be exploited to achieve remote code execution (RCE). This is only exploitable when running on Windows in a non-default configuration in conjunction with batch files.

Common Gateway Interface (CGI) is a standard protocol to allow web servers to execute command line programs / scripts via web requests. This protocol also allows passing of command line arguments to the script or program being executed via URL parameters. The protocol itself is defined in RFC 3875.

When CGI support is enabled in Apache Tomcat in Windows, and command line argument passing is enabled, it is possible to cause command injection via parameter interpolation when calling a batch file (*.bat / *.cmd). This happens because “cmd.exe” performs interpolation on some special characters before execution which can cause other shell commands to be called. Neither Apache Tomcat or the Windows JRE perform any kind of input validation for these special characters. A partial list of these characters can be found here and here. Additional information about why this issue is specific to the Windows JRE can be found in this blog post by Markus Wulftange.

3. Modify the conf\context.xml file on line 19, to enable privileged context:

4. Modify conf\web.xml to enable the CGI Servlet by removing the comments around line 387 as follows and adding the following parameters (enableCmdLineArguments is only needed for Tomcat 9):

5. Enable the CGI servlet by removing comments around this – you also need to change the URL pattern to match the one in the previous step (“cgi”):

6. Create a folder for the CGI files:

7. Place the following text into a batch file located in “webapps\ROOT\WEB-INF\cgi\test.bat”

8. Run Tomcat via the following command:

9. Trigger the following URLs and observe the dir command being run:

By default, Tomcat doesn’t pass all of the environment variables from the parent process that runs Tomcat itself. That means that if you run “set”, you will not see any environment variables other than those set by Tomcat itself. This also means that you would need to spell out the directory path of the command you are trying to run. However, if the “passShellEnvironment” parameter is set to true, the variables from the parent process will be passed through and you can call any command in PATH as well as view those variables. If the command cannot be found, there will be a error in the console log “XXXX is not recognized as an internal or external command”.

Example of trying to run a command without a full directory including the Tomcat console logs:

Examples of running with the parameter being set or spelling out the directory path:

Example of trying to view the environment variables without and with the passShellEnvironment parameter being set to “true”: 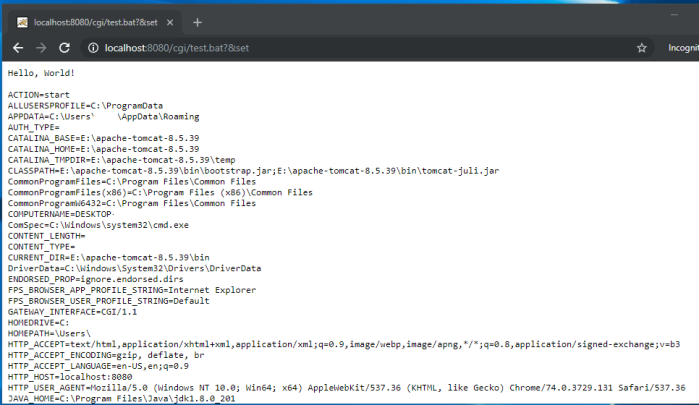 If the command being executed is a long running command, it maybe possible to cause a denial of service or a memory leak. This happens because Tomcat waits for the OS process to complete.

Here is an example of netstat being triggered:

Additional Notes – Other Commands and STDERR

The “executable” parameter indicates which executable should be used to run the script. By default, this is set to “perl” with the expectation that the files being executed are Perl scripts. If this is set to empty, then it is possible to execute batch files since those are executed by “cmd.exe”. HOWEVER, it seems that the command interpolation only happens with batch files – if this is set to real program, then command interpolation doesn’t necessary occur and this vulnerability may be not exploitable.

Also, if the command being triggered outputs to STDERR instead of STDOUT, that output doesn’t get piped back to the web request – instead it goes to the Tomcat console log.

Here is an example when “java.exe” is set as the executable parameter and produces output to STDERR:

This issue was responsibly reported to the vendor via the EU FOSSA bounty program operated by Intigriti. Vendor analysis indicated that the core cause for this issue has to do with the way the Java Runtime Environment (JRE) interprets command arguments in Windows specifically and doesn’t impact Apache Tomcat when used with other operating systems. The vendor assigned CVE-2019-0232 to track this issue and provided a fix.

Apache Tomcat is only vulnerable to this issue if the following conditions are met:

The vendor indicated that the following versions are vulnerable (no information is available on earlier versions):

Users are encouraged to upgrade to the following fixed versions or later:

IMPORTANT NOTE: even when running a fixed version, you SHOULD NOT change the “cmdLineArgumentsDecoded” configuration parameter to a different value. If you do, your installation may become vulnerable. If an upgrade is not possible, users can apply one of the following mitigations:

This report satisfied the requirement of the EU FOSSA bounty program and a bounty has been paid.

Text of the advisory written by Yakov Shafranovich.