Android devices can be crashed forcing a halt and then a soft reboot by downloading a large proxy auto config (PAC) file when adjusting the Android networking settings. This can also be exploited by an MITM attacker that can intercept and replace the PAC file. However, the bug is mitigated by multiple factors and the likelihood of exploitation is low.

This issue has been fixed in the November 2016 Android security bulletin.

Proxy Auto Config (PAC) files are text files that can be used as part of the network settings configuration to allow a web browser and other software that accesses the web. These files define which proxy servers should be used for which types of requests. They usually contain a Javascript function which can be called by the web browser to determine the type of proxy server to use. An example PAC file appears here:

A related standard called Web Proxy Auto-Discovery Protocol (WPAD) allows devices to find the locations of PAC files via DHCP and/or DNS. However, WPAD is not currently supported on Android.

When configuring a network in Android, one of the options available in the “Advanced” section is ability to indicate a Proxy Auto Config (PAC) URL which will point to a PAC file described above. The current code in Android does not check whether the PAC file may be too large to load into memory, which allows an MITM attacker to replace a known PAC file (if served without SSL) with a large one of their own and crash the Android phone.

Example of settings dialog in Android: 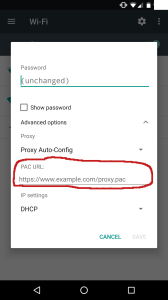 The vulnerability is that the Java code does not check how large the data file actually is. If a file is served that is larger than the memory available on the device, this results in all memory being exhausted and the phone halting and then soft rebooting. The soft reboot was sufficient to recover from the crash and no data was lost. While we have not been able to achieve remote code execution, this code path can potentially be exploited for such attacks and would require more research.

Specifically, the affected code is using Streams.readFully to read the entire file into memory without any kind of checks on how big the file actually is.

Because this attack require a user to configure a PAC file, and an attacker to be present and know about that file, and the file needs to be served without SSL to make the attack work, the possibility of an attacker pulling this off is low. This is also true because Android, unlike other operating systems does not support the WPAD protocol to retrieve PAC files automatically which can be exploited using a rouge access point or network.

2. Use fallocate to create a large PAC file in “/var/www/html/”

3. Go in to advanced network settings on the Android device and add the following URL as the PAC URL: http://192.168.1.x/test.pac

Save the settings which will trigger the bug. Once the phone starts downloading the files, the screen will go black and it will reboot.

This bug has fulfilled the requirements for Google’s Android Security Rewards and a bounty has been paid.

Bug discovered by, and advisory written by Yakov Shafranovich.